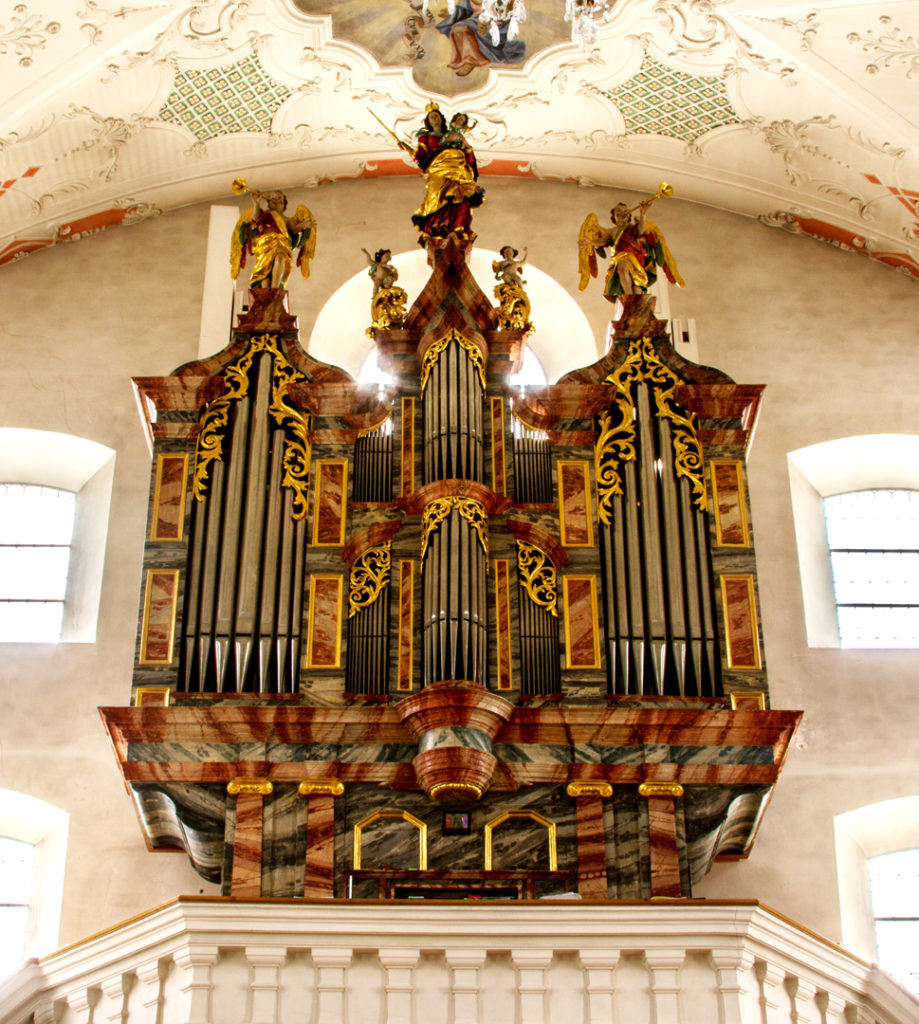 Read the description of the organ

The organ of the parish church of Reckingen is considered one of the most beautiful in the region. It is built in a highly refined manner and still remains enigmatic. It is the only eighteenth-century organ in Valais whose manual has two reeds. During the restoration, we have unfortunately not succeeded in identifying the original organ maker with certainty.

Thanks to its architecture and its finish, this exceptional work sets itself apart in Valais’ landscape with its façade originally subdivided into eight small additional flats, each comprising five pipes. Those forty pipes no longer exist today and the flat, flanked at a height by gothic arches (Tudor arches), were shut by means of boards. Four of the eight boards were joined to the soundboard, using engravings.

It is important to note that the construction of the parish church of Reckingen was completed in 1745 only and that the church was consecrated in 1748, once the municipality of Reckingen had finally succeeded – after vain attempts for over a century – in breaking free from the Münster parish. The joy generated by this newfound independence was so strong that the most skilled artists were mandated to reshape the internal installation and that no expense was spared.

Reckingen is the cradle of organ building in Valais, thanks to the Carlen and Walpen families. For a long time, the work on this organ was attributed to the organ makers Carlen or Walpen, or to both jointly. Nonetheless, on the basis of different architectural indications and acoustic hints, it seems that it is not the case, even though the involvement of Mathäus Carlen and Johannes Walpen in the making of this extraordinary organ might have seemed obvious.

The entire primary design, the technical infrastructure, the excellence and artistic fineness of pipework are inconsistent with the working method attributed to this day, in the light of research, to the organ makers Mathäus Carlen and Johannes Walpen.

According to some sources, it seems that one year after the inauguration, i.e. on 6 February 1749 at 2 AM, a huge avalanche gushing from the valley’s river cracked the rectory and substantially damaged the church. The portal was cracked, the window was smashed and snow had packed into the church. For a long time, the window had to serve as entrance because of the avalanche’s power. Being able to properly use the portal of the church took almost three months.

If we consider the height of this church’s window, we understand that this avalanche’s mass of snow and the heavy pressure in the awning of the church – where the bellows were located – as well as in the architectural passages to the organ, have reached the interior of the church and must have severely damaged the organ, which had been completed a short time before.

One could easily imagine that after this disaster, Mathäus Carlen and Johannes Walpen tried to save what could be saved, and then repaired the organ, within the scope of possibilities available and of their individual approach. To achieve that goal, they probably had to forsake some component parts in order to incorporate new ones.

It is probably during this devastating avalanche that the two reeds of the manual vanished. They were replaced only much later on, by the Konopka brothers from Poland.